The Desert Rat, formerly known as the Kangaroo Rat, is the first Desert animal in Mope.io. It's equivalent of the Mouse, Shrimp, and the Chipmunk, and is based on the real-life Dipodomys Macropus; a rat species native to North America.

The animal is like the mouse, with two fuzzy ears, fuzzy brown skin, with lighter brown around the ears, and a pink nose. It also has a furry strip of grey-brown on the tip of its tail, which is curved to the right.

Find Dates and eat them or use a Healing Stone to level up within seconds. When you get hit by a predator, you can sprint to escape - go to the nearest hiding hole until they go away. Your passive sprinting ability will help, but it is best to go hide, as predators such as the Gazelle, Desert Chipmunk and Armadillo also have speed-based abilities. Look for Venus Fly Traps, as sometimes there is meat there, and then you don't have to worry about getting caught, as it will give you a guaranteed upgrade. You can try straying a little out of the Desert and into the Land biome. When there, water mushrooms by pressing 'S' to create berries. You can also eat little honeycombs to level up like mad! (be careful of the Honey Bee stings though). Avoid water as you can freeze and die. 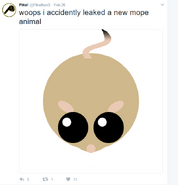 A Desert Rat sprinting from being hurt by fire, that is about to upgrade.

A newly-spawned Desert Rat.
Add a photo to this gallery

Retrieved from "https://mopeio.fandom.com/wiki/Desert_Rat?oldid=80108"
Community content is available under CC-BY-SA unless otherwise noted.