The Desert biome is one of the four main biomes currently existing Mope.io, alongside the Ocean, Arctic and Land. The desert was first released to Beta on October 11, 2018, and then again on January 3, 2019. It became live on April 27, 2019, and is currently the most recent biome to be added to the game (excluding sub-biomes such as the Amazon Rainforest).

A Giant Scorpion on a rock.

Desert Chipmunk on a tree.

A Bison goring a Hyena.

An Octopus being eaten by a T-Rex. 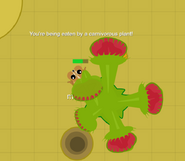 Venus Fly Trap eating a Desert Chipmunk.
Add a photo to this gallery

Retrieved from "https://mopeio.fandom.com/wiki/Desert?oldid=82986"
Community content is available under CC-BY-SA unless otherwise noted.