Not to be confused with the Reindeer or Gazelle, the Arctic and Desert counterparts of the Deer, respectively.

The Deer is the fifth Land animal in Mope.io, and equivalent to the Flamingo, Squid, Reindeer, and Gazelle.

The deer is a circular animal, with two large black eyes and a brown body. His ears are large and of a lighter shade compared to the rest of his body, while his antlers are even lighter, being a remarkable tan color. The deer now has a reskin and has white spots and the horns are longer with more bifurcations.

The rare Doe species looks the same as the Deer, except it has no antlers or white spots on its back. The Marsh Deer is a caramel brown, with white ears that are outlined with black. It also has a large white patch on its nose.

When you evolve to Deer, try to find a Mud patch that is empty, without any predator or prey that's Pig tier or above. Dig there in order to find the best food, such as Lilypads, raspberries and others. Any other animal can steal all your precious food, which is why it's best to find a secluded spot. If you see one nearby and you are digging, stop digging, eat what you dug, and switch places. Another benefit in digging in mud is that you will not run low on water, and the food there is more XP-rich.

Since Deers are low on the food chain and with minimal XP, no big animals should target you. However, don't count on it. Even so, animals such as Hedgehogs, Peacocks or Foxes may chase you down. If that happens, just run. Run to a hiding hole or a place where you can fit through but your predator can't. If your predator is a Fox, note that running into a hole is not a good idea as they can just pull you right out with their ability.

When running from predators in general, avoid mud and water as you either cannot go through them, or you are very slow in them. However, an exception is water spots as you do need water pretty frequently. As the Marsh Deer or Doe, escape certain predators on hills. However, Peacocks can also climb hills, so the safer place to hide is a hole in that case.

Generally, if digging up is not an option (either crowded server or you can't find a suitable place), then the best way to level up is blackberries, lilypads, and brown mushrooms. Try shooting water at the red mushrooms. They give a decent amount of XP. The listed items above can commonly be found in Lakes. It is also suggested to eat Ducklings in lakes, as they provide very substantial XP and are a reliable source of it. However, they can be a nuisance to chase after if you have no time

One other XP-gaining strategy is to wait in a hiding hole, and tail-bite a predator when it comes past. Ideally do so in a small hole, as predators would be less expectant of someone to bite them from there. Biting predators such as an Eagle or Rhino will be most beneficial, since theoretically their XP will be enough for you to progress to the next tier. 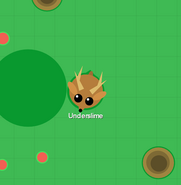 The Deer next to a Hill. 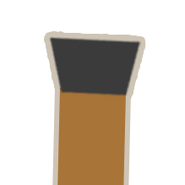 The unused ability of the Deer, the "deerHoof". 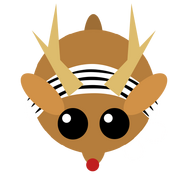 The winter skin of the Deer.

A Deer digging near a water spot next to a Lion Cub.

A Deer digging in the mud next to a Tiger.

A rare Doe on a hill.

A rare Marsh Deer on a hill.

A rare Marsh Deer digging for food in the mud. Notice the Gazelle-like animation. 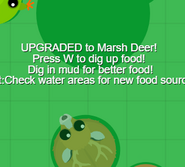 A rare marsh deer digging up Lilypads and mushrooms.
Add a photo to this gallery

Retrieved from "https://mopeio.fandom.com/wiki/Deer?oldid=80111"
Community content is available under CC-BY-SA unless otherwise noted.