UPGRADED to CRAB!
Crabs can survive on dry land!
(On land, Press W to go into your shell!)

Not to be confused with the King Crab, another type of crab in the game that is at apex tier.

The Crab is the third Ocean animal in Mope.io, and the equivalent of the Mole, Chicken, Penguin and Meerkat.

The Crab has a red body, with a red 'helmet' on top. It has two lines of ridges on its back. Two small pincers are on its front, and there are 6 visible pairs of legs. In-game, it looks as though the crab is constantly moving sideways (this doesn't at all affect gameplay). Without images, it actually walks forwards. It gains a new appearance when hiding inside its shell. When in the shell, it is covered by a triangle-like cover, which is a light shade of red, a bit like magneta. A little bit of the head and claws stick out when inside the shell.

A safe way is to eat plankton, but if you want to level up quickly go to the desert, as you move pretty fast in the desert, go and farm Cactus Pears. If your water is low, go to a water spot or Healing Stone. If there is no water spot or Healing Stone nearby, go to an oasis. Just like with shrimp and Trout, try looking for healing stones and Sharks. You can scavenge the Meat that will be provided from the Shark's bite on prey. However, don't get to risky as the shark can jaws bite you too. Any mentioned method will reliably level you up fast.

When you are threatened by a predator such as a Squid or Sea-horse, go onto an ocean hill (very common around the ocean) and hide in your shell. Flamingos however, can also climb hills. Since they can't climb rocks, you can evade them by staying on one. Wait there until either predator leaves. However, this will not work with Turtles. If one comes by, quickly dive and look for a whirlpool to hide in. If there are predators all around and the water isn't an option, use your shell ability. The damage done will be decreased and prolong any possibly consumption of you. With Flamingos, hide on a rock as they can only go on land hills, nothing else.

When hunting, try to look for shrimps and rabbits and mice in the water, as the latter two are slow in water. You are slightly faster than Shrimps (Not noticeable) so you can chase them down. Trouts are slightly harder as they have a boost ability that can outrun you. If you see one though, chase them down! Don't give up unless you are clearly much further away from it.

The crab with a Kraken. 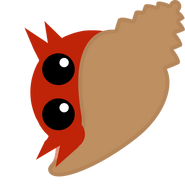 A Crab hiding in its shell. 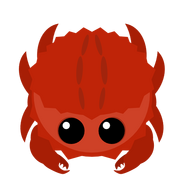 Crab with no animal images on.

A Crab with its shell.

Crab and Snail.
Add a photo to this gallery

Retrieved from "https://mopeio.fandom.com/wiki/Crab?oldid=84717"
Community content is available under CC-BY-SA unless otherwise noted.