Chili Peppers are a food in Mope.io that spawns in the Land and Desert biomes.

Eat Chili Peppers when running away from predators, or when attempting to damage prey. Animals that are Crocodile and above can eat them, so if you're chasing an animal that's Crocodile or above, eat the peppers yourself before they can get to them. If the prey does somehow gain speed through use of this food, or through Special Abilities, go to a bush (if you're in the Land biome) or quicksand/oasis (if you're in the Desert biome) to continue your pursuit.

On the other hand, as prey, if you can eat chili peppers, use them to your advantage. Eat as many as you can when fleeing from predators. Eat all of them so predators can't keep up. Also, for tiers 11 and 12 (Crocodile and Rhino) they are very nourishing in terms of XP, when eaten in bulk. Therefore, they are also a great food source that requires little to no effort. Normally can be found in bulk near bushes in the Land biome; less commonly in quicksand, but combined with Melons are still useful. 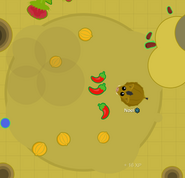 Red peppers near a Warthog.

Retrieved from "https://mopeio.fandom.com/wiki/Chili_Pepper?oldid=83386"
Community content is available under CC-BY-SA unless otherwise noted.