UPGRADED to CHEETAH!
Press W to get a speed boost! (Every 8 seconds)!

UPGRADED to LEOPARD!
Press W to get a speed boost!
(Leopards can dive longer!)

UPGRADED to JAGUAR!
Press W to get a speed boost!
(Jaguars can climb hills!)

UPGRADED to Black Panther!
Press W to get a speed boost!
(Black Panthers are fast on mud)

Not to be confused with the Snow Leopard, an Arctic counterpart of the Cheetah that has mostly identical features.

The Cheetah is the eighth Land animal in Mope.io, and the equivalent of the Gorilla, Toucan, Pufferfish, Snow Leopard and Rattlesnake.

The Cheetah has a pale golden color, with 20 darker spots on its back. Unlike in real life, the cheetah grows to be much larger than the lion.

The Jaguar has 17 markings on its back and is more of an orangish-brownish color.

The Leopard has 18 different markings on its skin and is a darker shade than the Cheetah.

The Black Panther has 21 of the same markings as the Jaguar, and is entirely black, with different shadings of black in different places.

Cheetahs, like Deer, are faster than normal on land. You can use your speed boost to easily escape from predators. Be careful not to curve around something, such as a hill, because that can give your pursuer an opportunity to attack you! If you have a straight path that you can follow to flee from your predator, you should be fine and able to lose your predator or jump into a hiding hole quickly.

Your increased speed also gives you an advantage in hunting and chasing prey; make sure to use your speed boost when they are running in a straight line.

You can also try launching yourself at the tail of an Apex animal or higher, to level yourself up quite a ways in a relatively safe and very efficient manner. It's recommended to wait until Black Dragons/Phoenixes are out of the Lava. Or simply try to bite a T-REX which would normally won't be in the lava, this may be ineffective sometimes, as skilled high tiers will try to defend their tail if they notice you.

If you are a Leopard, Jaguar, or Black Panther, be warned that people most likely want to kill you (presumably out of jealousy). If they attack you, boost away every chance you get until they give up. You can also climb hills, so you can use ocean hills to cut across and get to a whirlpool. If you are a Black Panther, you can also speed away using mud.

A safe and reliable alternative to levelling up is to eat Pears, Red mushrooms and/or Honey Bees.

The Cheetah on an island in the ocean.

Two cheetahs near a berry bush. 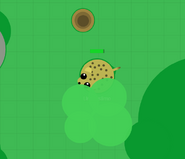 The cheetah near a transparent bush.

A Black Panther safely in a mud spot.

Two Black Panthers Together! What a rare sight!

A Panther and a Cheetah about to run from a bear.

A Tiger using its ability on a Leopard.

A Black Panther next to a Fire Tornado with a Beehive stuck inside.
Add a photo to this gallery

Retrieved from "https://mopeio.fandom.com/wiki/Cheetah?oldid=80126"
Community content is available under CC-BY-SA unless otherwise noted.