The Cactus is a food source that have been released as part of the Desert update. They are often located randomly across the expanse of the Desert and can produce Cactus Pears. There was a nerf in January to desert foods so now they give less (25K for Black widow).

A cactus is a green, 8-shaped star-like circle with brownish-white spikes. Since the #GoldenAge update it was resized and made a lot smaller.

Cacti are the most beneficial foods for tiers 12 to 14, even with the recent nerf, and can be harvested in bulk with the healing power of Aloevera to eat them without losing too much health. Now with the new nerfs, cacti don't always inflict damage and can either stun with a microscopic amount of damage or bleed for a few seconds, so eating aloevera(either the plant or the leaves) isn't as necessary unless you're eating a ton at the same time. Also, you can avoid taking damage if you bite at the non-spiky parts of the cactus, but this requires precise aim and coordination.

For apex tier, you cannot as easily eat cacti, since Aloevera has no effect. Therefore, the best way to farm them is by lurking near another tier 12/13/14 animal that is trying to eat one, then chasing them off and eating the cactus for yourself. Some players may try to retaliate after you eat the cactus, so try to avoid their Special Ability if they use it. Be wary of your health when farming cacti: You never know when another apex tier might show up when you're low on health. When your health gets low, stop eating cacti for a moment and try to find a Healing Stone. If you'd like to keep gaining xp while healing you can distract yourself with aloe vera in the meantime.

Sea Monsters are able to use their whirlpool to suck in cacti that are on the shore and into the ocean. While doing so, the cacti can be consumed in one hit. Do this for a small XP boost, but do so sparingly as another Sea Monster or Giant Scorpion could come along and kill you. It's normally safer to farm Conches on islands. The xp given is smaller, but they respawn very quickly on islands and can be found in decent amounts.

Cacti can also help you level up as Kraken. Using this strategy, go near the shore between Ocean and Desert, and use your ability. Any Cacti nearby will be sucked in and eaten quickly, giving you 75k XP(As of GoldenAge update). This is more XP than a typical Shark, and if you only eat cacti, it will take around 38 cacti. Note the cactus will likely damage you(how much exactly depends on RNG, it could be anywhere from 1/8 to 3/4), and that other Krakens and King Crabs may take advantage of this to try to kill you. Also be sure to watch for Sea Monsters, Golden Eagles, Pakistani Vultures, Shabazes, and T-Rex's, which are the 4 largest threats while using this strategy. (You can also use this strategy with Aloe Vera, which will give you 1/3 the XP and takes double the hits to eat, but doesn't damage you at all) .

The T-Rex is also able to use its ability to easily eat cacti. Drag another animal around with your bite, and shove it into the cactus. The animal will simultaneously be damaged and also reduce the health bar of the cactus, allowing you to finish it off in a single bite. Note: this only works on animals that are tier 12 and above.

Cacti with pears spawning around it, above a Desert Rat.

A small cactus with pears, that has some of its health damaged. 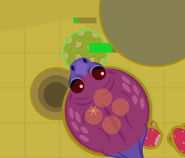 The stunning caused from a cactus, on a Night Komodo.

A Gobi Bear eating melons near a cactus.
Add a photo to this gallery

Retrieved from "https://mopeio.fandom.com/wiki/Cactus?oldid=84236"
Community content is available under CC-BY-SA unless otherwise noted.