UPGRADED to Arctic Fox!
You can kick players out of hiding holes! (Press W when in one)!
+ Hide in red berry bushes!

Not to be confused with the Fox or Fennec Fox, both of which are different species of foxes that spawn in different biomes.

The Arctic Fox is the sixth Arctic animal in Mope.io, and equivalent to the Fox, Hedgehog, Peacock, Jellyfish and Fennec Fox.

The Arctic Fox has a white, circular, furry body. Its ears branch north-east, and are tipped with extra fur. The Arctic Fox also has a narrow snout that's also quite furry. Its tail is a darker shade of white, and also very fluffy. In short, it looks like its Land counterpart, the Fox, except with a white body.

The most productive way of levelling up with the Arctic Fox is by eating Red mushrooms at a Lake. They can be found in bulk at the lake's islands, along with Pears and Ducklings at the lake; the latter two are a bit harder to level up with, but effective nonetheless.

If you want to try chasing prey, hide in a berry bush. Your Special ability can be used either offensively or defensively. If you want to go offensive, then use this ability to chase prey easily, since they cannot go through berry bushes. If they go in a hiding hole, kick them out and resume the chase. Your best bets are Reindeer, Seals, and Penguins, but can outmanoeuvre you on ice, so lead them away from it.

If you want to go defensive, however, then use this ability to aid yourself in escaping. Although all your predators can go through berry bushes, you can still outrun them, especially if there are hiding holes near the bushes. If they go into one with you, kick them out, and run while they're stunned. Don't flee to ice as all predators except for the Snowy Owl will easily catch up with you on there and eat you. Use your small size to squeeze through hills and hide in smaller hiding holes.

The Arctic Fox next to a bush, with a Chipmunk hiding in it. 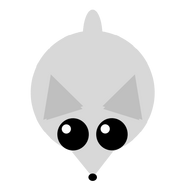 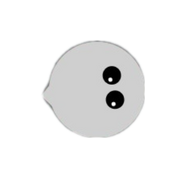 An Arctic Fox pulling a predator out of a hiding hole.

A Snow Leopard and an Arctic Fox fleeing from a Sabertooth Tiger. 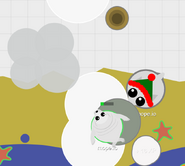 Seal trapped on a hill by an Arctic Fox with winter skins on.
Add a photo to this gallery

Retrieved from "https://mopeio.fandom.com/wiki/Arctic_Fox?oldid=78214"
Community content is available under CC-BY-SA unless otherwise noted.